Home » Gossip » Must Read » CONTRIBUTION OF FOOTBALL TO THE NATION

CONTRIBUTION OF FOOTBALL TO THE NATION 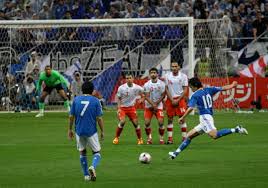 Football means different things to different people. For some people it is their living. For some people it is a passion. For some people it is almost a religion. Some love it, some like it, and some fine it quite enjoyable. Of course, many people think it is the waste of time and others actually dislike it with an intense hatred.
So what is about the game that can bring about such different extreme reaction in people? Twenty-two people from two teams chasing a ball around the field. All they need to do is kick a ball into a great big net to score a point. They run for over an hour and half an d the game finished exactly as it started, with no score..
From the above paragraph we can realised that apart from religion there are no any activities that combine different people with different tribes, different religion, language, culture, and different places, society or nation except football. So football is not just a game but also a way of amalgamated people together and most of time football is about peace, unity and progress.
Peace, unity and progress are what every nation dream-up. Football is also good in body health because it is part of exercise. Football means everything in human society. It brings joy, fun and much more. Honestly, some people believed that if nuclear was a distinct possibility, their biggest worry would be if the next weekend matches would be affected. So football is modern any suggest.
Football is the only thing left in this world that has not been infected by politic. Yet, football is the only thing when we can see courage really does not matter, and not every big thing come from big thing. We can see how the majestic Chelsea failed to make a point out of their great ambition of summoning great players. Football is only good thing left in this world.
Football is also important in tackling racism. It is easy to separate from the real world. Football is part of human life and it is a part that we all cherish so dearly. We those who participate as the heroes and thy contribute more to their society. For example Kanu Nwanko of Nigeria. He opens a hospital for his community. He also established ‘’Kanu heart attack foundation.’’ Cristiano
Ronaldo of Portugal 200 euro to palastine. Also Manchester United donated money to an orphans in South Africa.
Heroes are those who save people but not only those that wearing fire-fighter’s uniform but also those who make their country so popular in the eyes of the world because of their skills in football. For example brazil. What make Brazil popular in the world? not because of their natural resources but also their great contribution in football and their unbeatable players like Pele, Ronaldo, Kaka, Ronaldinho and so on.
Football plays a key role in family life especially in Europe, linking the experience of family members across generations and creating a lasting sense of tradition and belonging. The strongest of those relationships is that of father and son. Most men become fans because would take them to matches as a child, and many older fans still retain strong memories of these formative experiences.
Football unites people from varied backgrounds across the whole of the world and undoubtedly beyond. Football is not just a game but also a smile that people cheer with it. Football is only a good thing left in this world.
ALHAMDULILLAHII... Comment and Share. Call us on 07035311650 for more information.

A few of our information about the CONTRIBUTION OF FOOTBALL TO THE NATION, I hope you can exploit carefully
You have finished reading CONTRIBUTION OF FOOTBALL TO THE NATION and many articles about Tech Gallery in our blog this, please read it. and url link of this article is https://littlebitjohnny.blogspot.com/2016/06/contribution-of-football-to-nation.html Hopefully discussion articles on provide more knowledge about the world of new tech gadgets.

Related : CONTRIBUTION OF FOOTBALL TO THE NATION